India Rose Strings is an ensemble comprised exclusively of professional musicians who all hold a degree in Music and have an extensive background in performance. All gifted musicians with lively personalities, they have the ability to effortlessly captivate a room. Many hours are spent perfecting their music, combining arrangement and improvisation to produce a unique sound fit for the most special occasions. Although they are based in Leeds and primarily take bookings from the four corners of Yorkshire, they are happy to perform all over the country and beyond! 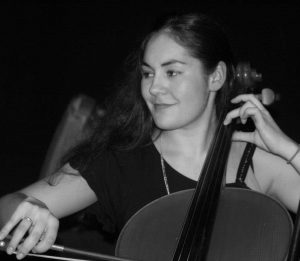 Chloe is a cellist and singer whose dynamic personality has led her to play music in France, Slovenia, Spain, China, Belgium, Germany and Holland. Having graduated from Newcastle University with a First Class Honours Degree in Performance, she has continued to perform with musicians all over the world. A musically diverse and vibrant performer, Chloe’s collaborations extend into contemporary dance, World and Classical musics, spoken word (featured on BBC Radio 3), dance fusion and improvisation. Chloe also enjoys teaching, songwriting and arranging music for India Rose Strings, her 8-piece swing band and her ceilidh band. 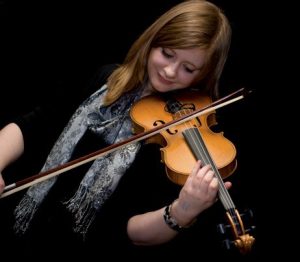 Hannah has been playing music since a very young age and now specialises in violin and piano. Also a music teacher, Hannah is passionate about getting young people into music and is an extremely active member of the music community in West Yorkshire.  Her performance experience has led her to work with orchestras, string quartets and, being from Aberdeen, a lot of ceilidh bands! Hannah has a knack for arranging pop music for string quartet and many of her arrangements can be found among our repertoire. 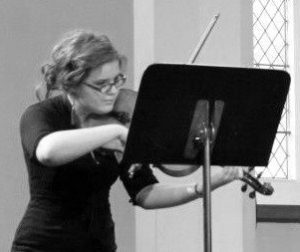 Megan is a viola player who has extensive experience performing solo and in ensembles across a range of musical genres. She majored in performance at the University of Huddersfield, where she explored 20th century repertoire for Viola. She has played in many different orchestras, such as the Liverpool Philharmonic Youth Orchestra and Slaithwaite Philharmonic Orchestra as principal viola. Megan has collaborated with many different post-rock groups, which has resulted in travelling throughout the county and Europe.  She has also recorded film soundtracks for the musician, Bill Ryder-Jones, former guitarist in the Liverpool band The Coral. These soundtracks include Leave Taking (2009), a short film funded by Northwest Vision and Media and the UK Film Council, directed by Laurence Easeman, and Piggy (2012), directed by Kieron Hawkes. When she is not performing, Megan teaches strings in schools across Leeds.

Aimée is a violinist from West Yorkshire and a graduate of the University of Huddersfield where she led the Symphony and String Orchestras and achieved a First Class Honours Degree in Music. As a member of many orchestras and musical ensembles, Aimée has had the chance to perform in France, Austria, Luxembourg and Germany, as well as in notable venues such as the BBC’s Maida Vale Studios and the Royal Albert Hall. Aimée has interests in a mix of musical genres and aspires to make music accessible to all, wishing to work with people from all styles and specialisms. Keen to further her passion for music, Aimée has just finished studying for a Postgraduate Diploma in Music Performance at the Royal Welsh College of Music and Drama. 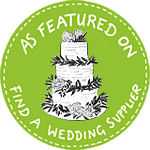 Our biggest fans this week: MerriottPhil. Thank you! via https://t.co/9CJttgLVTO

We know many of you are concerned about how #Covid_19uk will affect your #weddingday.

Today we will be posting answers to FAQs relating to the issue under the hashtag: #CoronavirusFAQ

We hope it will inform and help you with the big decisions regarding your big day!💕💍

Q: Will my wedding insurance cover me to postpone my wedding?

A: Most policies only cover you if you are forced to cancel or postpone your wedding (ie because the venue closes or you or immediate family are ill) in which case you won't be covered...

...Most venues are allowing couples to postpone without penalty but they aren't obliged to! Your other option is to sit tight and wait to see if - or when - the government bans public gatherings and weddings.

Read our blog for advice: https://t.co/ELMDBInaH8